Skip to content
Print Recipe
Crunchy Quinoa Salad
Quinoa is almost a complete food on its own….it has a significant amount of amino acids which makes it high in protein. It has a wealth of important minerals – iron, calcium, zinc, potassium, as well as some B-vitamins from its carbohydrate content and small but useful amounts of essential fatty acids. However, on its own, as with most grains, it is rather bland. That said it is incredibly versatile, and I like to cook it up and use it hot instead of rice or wheat-based grains, in its flake form for porridge, or just cold as a basis for some interesting and tasty salads. On top of all this, it is gluten-free! As it can be bland, it is a good idea to toast the grains in the oven for about 10 mins. before you cook it as it gives it a nuttier flavour and makes it a more robust grain altogether. 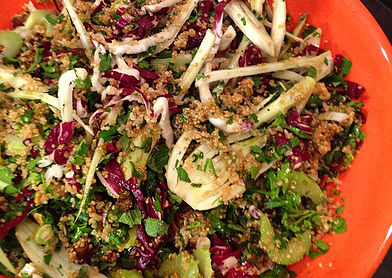